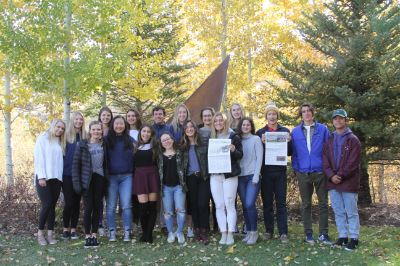 Community School’s student-led newspaper, the Cutthroat Underground, is written and produced by Upper School students. Current editor-in-chief Ella Viesturs and online editor Katie Peters, both seniors, were thrilled to publish the first issue of the paper in October. “The goal of the paper is to primarily showcase students’ lives and opinions,” Katie said. “We believe that a totally student-led newspaper is key to getting an honest outlook from real students.”

Faculty advisor and Upper School English faculty member Phil Huss has been happy to see interest in the student newspaper surge this year under the seniors’ leadership. “I have wanted to revive the paper for years, since the last time it was in publication in 2005,” Phil said. “I also wanted it to be sure it was student driven, and this group took the lead.”

While the student staff, which meets weekly during the scheduled Upper School break period, takes the lead in developing content and producing the publication, Phil (along with fellow faculty advisor Elle Lucas) helps the club by organizing  student roles, codifying the responsibility of editors, helping to generate article ideas, editing, formatting, and teaching journalistic writing.

Phil loves seeing the students’ commitment to the paper and to sharing the topics and insight of their fellow Cutthroats. “The paper reflects students’ serious inquiry into a wide range of topics, from gun control to the new student schedule, as well as light-hearted, fun pieces like the funny crossword, Halloween quizzes, Undercover Underclassmen interviews, and Happy News features.” And, he noted, the first issue reflects the dedication of the students at the helm of the club. “This year's staff is exceptional. I love that this effort is student-led.”

As editor in chief, Ella has appreciated the opportunity to dig into her interest in journalism and hopes the paper “entertains, informs, and recognizes the student body of the Upper School.” As an outlet that showcases the students’ lives and interests, she said, the staff’s goal is to provide “attention to detail and to represent as many facets of our lives as students as possible.”

Katie, who, together with fellow senior Chloe Khosrowshahi, launched the first online version of the paper this year, said that, as a student-led effort, the paper “is key to getting an honest outlook from real students at the school.” The opportunity to highlight topics that might be controversial, Katie said, has taught her valuable lessons about journalism and had increased her drive to highlight the student voice. “I really had to fight to get a particular story published last year, and getting something controversial published was an accomplishment.”

As the Cutthroat Underground staff looks ahead to their next issue, they remain committed to sharing news, debate, and fun with the student body. Asked for a teaser about the next issue, Katie offered: “Gear up for some super-top-secret student-produced videos!”