The Light That Leads the Way, Why Community Matters: Tyler Norris ‘77

For over 35 years, Tyler Norris ’77 has shaped health and economic development initiatives in communities across the country and around the world. He did this while an executive leading Total Health for Kaiser Permanente and for decades prior in his own business, serving as a trusted advisor to philanthropies, health systems, and government agencies. His service in the public, private, and nonprofit sectors has focused on population health improvement, community vitality, and equitable prosperity. Today, Tyler serves as CEO of Well Being Trust, an impact philanthropy focused on advancing mental, social, and spiritual health in the United States. He is also currently the board chair of Naropa University. His work has led him all over the world including to the Middle East, where he helped open the Abraham Path, over 2,000 miles of scenic trails in Turkey, Syria, Jordan, Palestine, Israel, and the Sinai, offering travelers positive intercultural encounters and providing economic benefit to local communities. He also helped establish the national park system and micro-finance initiatives in Tajikistan. After graduating from Colorado College with a B.A. in World Political Economy, three decades later, Tyler earned a Master of Divinity from Naropa University and completed Harvard Business School’s Executive Program.

But back in 1973, this path of service was not assured. Tyler was struggling and getting into trouble, the sort of trouble that could have derailed his future. Tyler credits Sam Hazard and the Sun Valley Community School (“Sam’s School”) for giving him a second chance and helping to light a better path for his future—a path that centers on the importance of community.

As one of only a few 9th graders in the first year of Sun Valley Community School, affectionately and colloquially known as "Sam’s School" back then, Tyler and his peers got to be “perpetual seniors” when 10th grade was added the next year, 11th the following, and so on; they were the oldest students enrolled at the school and, as such, they had a large role in those early days. As Tyler recounts, “We were invited to join the conversation and be part of the co-creation of Sam’s School—a school that grew out of a collective idea that education in this valley could be done differently.” This small upstart of a school was inspired by students, parents, and teachers working in partnership to create and nurture the educational experience. It was a vision of education founded on the power of
community.

For Tyler, the impact this community had on his life cannot be understated. He says,  “This school and this community saved my life,” setting him on a vocational journey as a innovator and a serial social entrepreneur who aimed to give others the same sense of belonging and support.

Tyler remembers those early days at Sam’s School: "Sitting in seminar with Jimmy Woods having conversations about race and power. Reading Native Son…we debated issues of identity, class, and privilege in an elevated dialogue that is more important now as ever in these times of racial reckoning and toxic partisanship.” It’s not just the conversations that Tyler remembers, it’s the way they happened, “There would be a faculty member like Jimmy with six or seven of us in a circle, not rows. You had to read everything, and you had to participate. With such small classes, there was no hiding. You had to do the work and show up ready.” It may seem like a small thing now, but the circular nature of the classroom structure made an impact on Tyler. “At Sam’s School, instead of a world of hierarchies like other schools, we learned to function in circles that called us into shared accountability for conversations of significance,” he explains.

Although Tyler was enthralled with the learning experiments and experiences happening in the basement of St. Thomas Episcopal Church that first year, he and some friends were struggling in their personal lives. “Concurrent with being good students in the ‘circle’ of a loving school,” he says, “some of us were leading two lives, struggling with substance misuse under the radar. This led to making some mistakes within the larger Sun Valley/Ketchum community. A couple of us got caught, and found ourselves in a fair amount of trouble.” A few weeks later, the Head of School, Sam Hazard, called for an all-school meeting. Tyler remembers that day, “Sam acknowledged that we had some students in our midst who were not doing so well. He wondered aloud how we should deal with students who acted out and broke laws.” Sam, who was normally an affable, easy-to-approach man, brought a stern demeanor to this conversation. Sure that he and his friend would be expelled for their transgressions, Tyler steeled himself for that revelation. And this is when he learned the impact of a well-placed pregnant pause. According to Tyler’s best recollection, as Sam reached the crescendo of his speech, he said, “Any kids who are struggling like this in our community…(long pause)…NEED this community. They NEED this school.” And with that, Tyler and a classmate got a second chance and that has made all the difference. “Today, this is called ‘diversion,' something that should be available for every kid in America, not just a white kid of privilege.”

Tyler didn’t get off without consequences, but instead of being kicked out, he was (in his words) “folded in.” Sam, the faculty, the police (yes, they were involved), and the judge all prioritized restitution, reconciliation, and healing over punishment. “At this crucial time, at a time when I could have been disinherited, my buddy and I were asked to step up to something bigger than our addictive behaviors. Instead of being shunned, even though I felt shame that lasted for decades, I was embraced with all my flaws, but I was also expected to do something with this opportunity. I did, and came out stronger on the other side. This community saved my life. I don’t know what track I would have been on if my early challenges had not been addressed in this transparent but caring way. This experience shaped the rest of my life.”

Tyler has spent his career trying to create—on a repeatable and larger scale—the sort of community that Sam and others created in that church basement. He says, “Ultimately, it comes down to this: How do we create communities that (1) are radically inclusive; welcoming people as they are; (2) create a sense of belonging; rooted in dignity and respect; (3) offer opportunity to express purpose and meaning through creativity and service.”

Tyler’s path has been circuitous but intentional, one that has taken him from government to the corporate world to nonprofits to a convergence of government and service (with a pilot’s license thrown in for good measure).

After graduating in the first class of Sun Valley Community School, Tyler went to Colorado College where he studied political economics. He was inspired by Julie Hazard, a Community School co-founder, teacher, and Sam’s wife. Tyler says that she sparked a curiosity about the world in him that informed his major. “It mattered to me—understanding the world and our human, ecological, and political interconnectedness.” His first job out of CC was in Washington D.C., working for a year with U.S. Senator, Steve Symms. From there, Tyler went to work for NYC-based FlightSafety International that trains corporate jet pilots. Tyler’s curiosity with flying had started a few years prior, when along with classmates Andrew Dumke ’78 and Paul Browning ’79, he earned his pilot’s license. He spent five years leading FlightSafety’s office in Colorado and during that time, helped to start Step Denver, a nonprofit with a mission to serve men who are fighting addiction and working to get their lives back on track, an organization that is still going strong in Denver today.

Tyler’s work with Step Denver led him to look for more ways to put his political, corporate, and service experience to work and he found it in an unlikely character, the guitar-carrying, song-writing, environmentally-woke John Denver, who hired Tyler to create a global environmental network as part of the Windstar Foundation, offering calls to action at John Denver’s shows. There, Tyler would recruit thousands to help in their communities. These groups planted 500,000 trees in Washington D.C.; created an environmental education curriculum for the state of Texas; worked with Cleveland schools on reducing violence; and founded a nonprofit in Japan to create awareness about the impact of cutting down hardwood trees in southeast Asian forests. And more.

Tyler's work with John Denver meant many nights backstage, but it also meant that, as Tyler says, “My vocāre was becoming even more clear. I’m a mission-oriented person and purpose fuels me. After two years with Windstar Foundation, I began the next chapter of my life working at the 125-year old National Civic League. This set the stage for my work in over 500 communities around the world. My experiences eventually led to the Sisters of Providence and St. Joseph asking me to accept the call to become the founding CEO of  Well Being Trust. This calling started at Community School; it began with forgiveness, being connected to something larger than myself, and finding ways to serve.”

Tyler’s philosophy is that individual health and well-being are at the center of a community’s health and that well-being is informed by many who have come before him. He draws on de Tocqueville’s observations in the 1830s about the American experiment, most notably that the important work happens via our democracy at the community level. In a keynote speech he gave to the Federal Reserve Bank of San Francisco in 2019, Tyler emphasized the power of economic localism and civic engagement. He told the story of how Step Denver renovated the building they now occupy with little to no money. When members of the staff were wondering aloud how they could possibly afford to fix up the building, the Step Denver “clients,” whom Tyler describes as mostly having lost their families, their jobs, their places in society due to their addiction, heard that they needed plumbing, painting, and electrical work. Turns out, the men in that room, the very same men most in need of Step Denver’s services, brought every one of the needed skills and competencies to the table. They were “folded in” to the process of rehabilitating the building. That inclusion, that recognition of their gifts and assets, in turn, contributed to their own life rehabilitation. Tyler concludes that story saying, “No one outside of the program ever lifted a hammer or a paintbrush inside that building. And 35 years later, Step Denver is still operating in that building, serving people in need, and allowing people in recovery to lead in service.”

Tyler has also long been inspired by community developer James Rouse, whose mantra, “A healthy community is a garden to grow people in,” became his own. From his work with Step Denver (work that was recognized by President Ronald Reagan) to his work with Kaiser Permanente, Well Being Trust, and beyond, Tyler has brought his particular brand of light to communities around the world. Whether he is working in mental health and addiction, social and racial justice, climate change and the environment, food security, housing, or the intersection of any or all of these issues, Tyler brings the light that is essential to that growth.

Anyone who would falter like this…needs a community like this. These words and a commitment to a healthy community full of healthy individuals have lit Tyler’s path for over 30 years.

If you are struggling with substance abuse, depression, anxiety, or other mental health issues, you do not need to struggle alone. Reach out to: 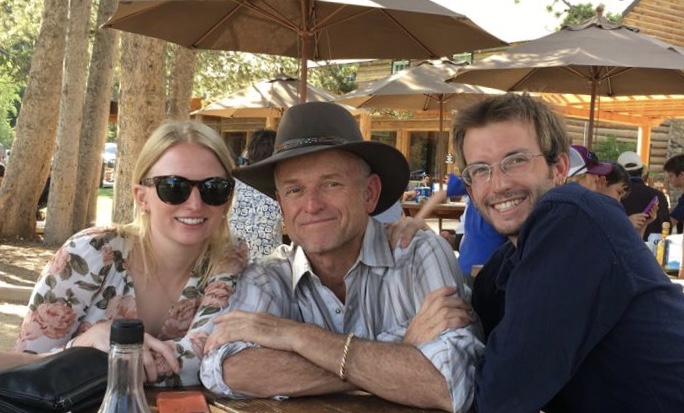