Lookout for the Unseen: Emily Boettger ‘20

In March of 2019, I was fortunate enough to go through an experience that I know will continue to impact me for the rest of my life. Like all good things, the opportunity came to me randomly. I went on the new service trip to Portland, Oregon, when winter trip options were first expanded. In Portland, we worked with an organization called Because People Matter (BPM), a nonprofit focused on helping the homeless that runs “Transformation Trips” emphasizing compassion, destroying stereotypes, and “loving people because people matter.”

While the BPM staff consists of many passionate people, one member of the group, Tom, changed my life. Just like Santa, he’s a short man with a long white beard who always wears a winter hat and a cheery grin on his face. He’s also an artist, and the walls of the BPM office/hostel were covered in drawings of his pet pigeons, Jesus and Mother Teresa. As we started graffiti clean-up the first day, he skipped joyfully around from dumpster to dumpster. Quick with a joke and well informed, he spouted facts about the foundation of “Stump-town” and Voo-Doo Doughnuts as the rest of us struggled to keep up with his joyous pace. His positivity did not match our environment. We were on the “bad” side of town, in the lowest income neighborhoods, with high crime rates, and drug dealers, and homeless people on just about every corner. As we scrubbed a bus stop shelter, a man came stumbling over to Tom. He collapsed into Tom and began sobbing. “My girl! Sylvia!” he wailed into Tom’s shoulder. “Can you pray for me?” I was with two other kids and we were baffled. “Did Tom know this man?” It didn’t seem to matter; Tom held the man tightly and prayed for him out loud on the busy street, allowing the man to soak his jacket as he cried into his chest. We all bowed our heads, and as Tom continued, the man quieted. I looked up and watched him with his white beard and piercing blue eyes as he consoled this man. I thought, “Well if there is a God, this is him.”

I’m spiritual and believe in something higher, but I have never resonated with any particular religion; however, throughout my week in Portland, I found myself transformed, inspired, and enlightened by Tom and others. I found my “religion”—serving others, making meaningful connections to restore hope in both parties. There is one interaction that confirms this faith for me. “Night Strike” is a BPM-sponsored community gathering that “mobilizes volunteers to meet needs on Thursday nights under the Burnside Bridge in Portland. It is an opportunity for members of Portland’s homeless community to hang out together, enjoy a hot meal, receive a free haircut or shave, have their feet washed, or have their old clothes, shoes, sleeping bags etc. replaced. I volunteered to help at the hygiene station and wash people’s feet. One woman came up quietly and sat down in the chair. I grabbed my bucket of warm water and soap and sat down at her feet. I looked up at her and said, “Hi, I’m Emily.” She looked back at me and her eyes welled up, “You know, you’re the only person that’s looked me in the eyes in four days.” My heart broke, and as she folded herself over and began sobbing, I started crying as well. Her head was between her knees at the same level as mine and we stayed there crying together. She pushed her head forward so that our foreheads were touching, and she asked me for a prayer. I had never prayed before, but in that moment, it came quickly and effortlessly. I told her of all the things I hope will come for her: health, happiness, stability, and compassion. She is someone I will
never forget.

Later that night I told Tom about her and thanked him for opening me up to this new “faith.” He thanked me in return and gave me something he had drawn for me. A pencil drawing of his pigeons titled “Lookout for the Unseen.” Tom’s pigeons hang above my bedside table at home; they are the first thing I see every morning. 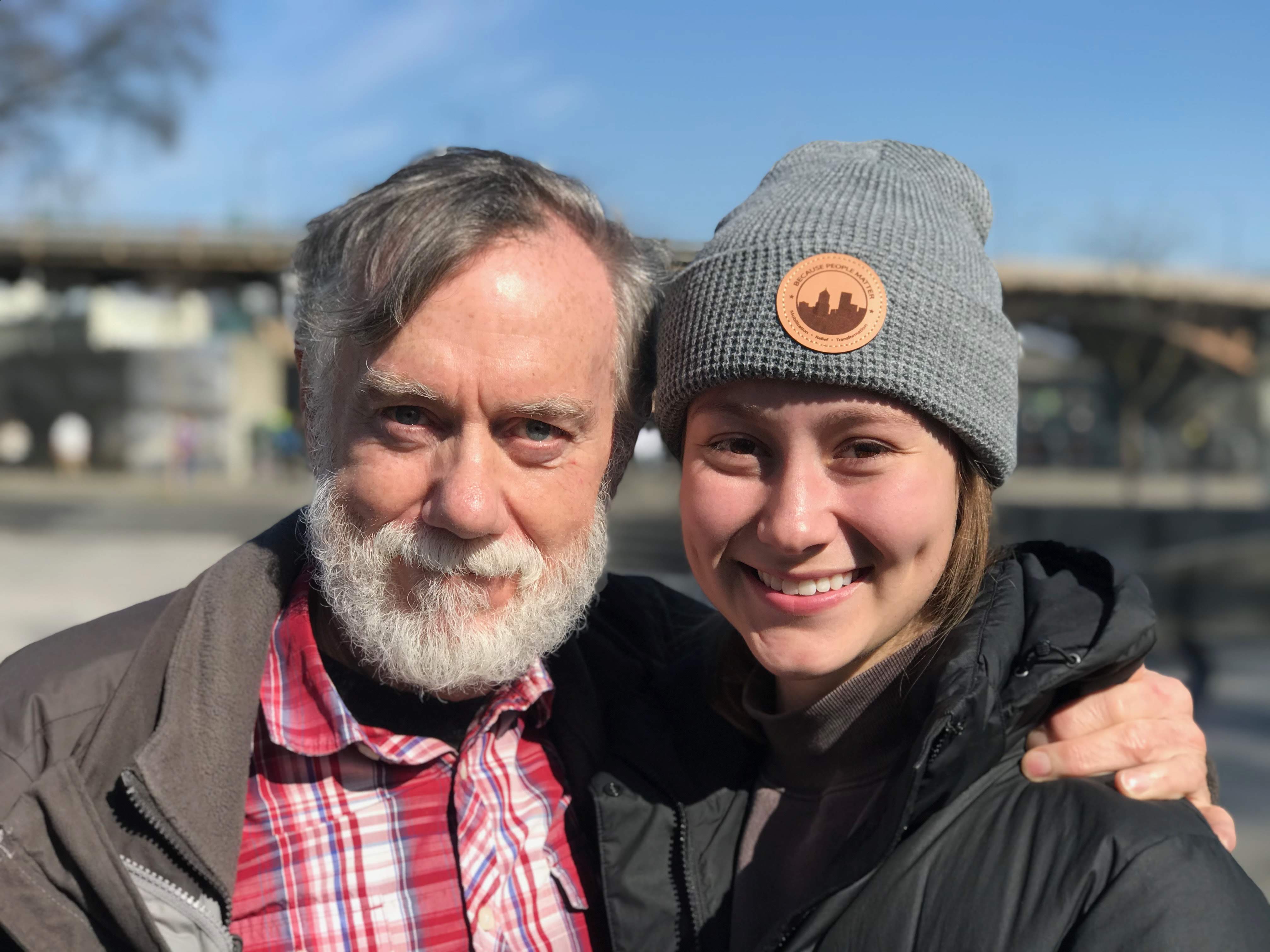