Riley Berman ’09 has always been at home in the elements. Seeking adventure and finding solace in the rivers and mountains of Idaho since he was a small boy, Riley, who, by his own admission, struggled as a teen to maintain his motivation for academic pursuits, excelled when it came to the outdoors. Today, the rhythms of Riley’s life are dictated by the seasons, and he would have it no other way. In the winter, Riley is the General Manager for Hailey’s Rotarun Ski Area, a small-town gem of a ski hill. And during the rest of the year, Riley is a fly-fishing guide for Silver Creek Outfitters. When he’s not driving a cat at Rotarun or a drift boat on the river, Riley helps his wife Katelyn take care of a menagerie of animals on their ranchette in Bellevue. We met at Hailey Coffee Company in between feeding and grooming to talk about his time at SVCS, his life since he graduated, and how in the world this very reluctant English student (I was his English teacher in 9th and 11th grades, so I have a more than passing familiarity with the degree of his reluctance!) ended up being an English major with an unpublished novel hiding on his hard drive.

Picture this: it’s late March or early April in 2009, and a 17-year-old kid has hitched a snowmobile ride with a friend on his way out to a small spring on the other side of Galena Summit. The water bubbling up out of the earth is the source of the great Salmon River, the River of No Return. And this teenager is planning to ski/kayak/walk the length of it for his Senior Project, making most of the 450-mile, 27-day journey solo. Yes, solo at 17.

If that sounds like a bold undertaking for a young man, it was. When he talks about it now, Riley seems a bit shocked that the adults in his life would be on board for him to do it. But even at 17, Riley was one of the more competent people in any group of experienced outdoors enthusiasts. You see, Riley has always been at home in the elements.

Riley didn’t come to his Senior Project (or his senior year) easily—his high school years, well, let’s just say that science experiments, quadratic formulas, and essays on the American experience were not things that set Riley’s heart on fire. It wasn’t a lack of intelligence or understanding that made school a struggle for him, but rather, Riley had a hard time seeing the relevance of his classroom work in his everyday life pursuits. But he also recognized that Sun Valley Community School offered him so many things outside of the classroom that did ignite him, so he stuck with it, with only a few arm twists here and there.

Riley was a ski racer who made it to Nationals his junior year (only to sustain a career-ending injury), and he excelled in the Outdoor Program. Although he was a Cutthroat before the birth of the academy system, Riley would have been a perfect candidate for both the Sun Valley Ski Academy and the Outdoor Leadership Academy. He also appreciated the sense of community that the school offered him. He got to know his teachers well and let them know him; he knew students older and younger than himself throughout his time at the school and built meaningful relationships. He was also the personality inside of the Cutthroat mascot suit for a few years before graduating.

I didn’t confirm this with Riley, but my best guess is that the possibility of a Senior Project and the chance to immerse himself in the elements got Riley through his senior year. A love of the river, a connection to some seasoned river guides, and a mom and dad who no one would ever accuse of being "snowplow" parents made a nearly solo run of the entire Salmon River—from headwaters to Hellar Bar—a possibility. Riley’s willingness to embrace the inevitable discomfort (river rafting in Idaho in APRIL!) and challenges (there would be hiking, ski touring, rafting, and most likely some portaging) made it a reality.

The premise of the Outdoor Program is that our time in the outdoors is valuable in and of itself, to be sure. But the OP is such a fundamental part of the SVCS experience because not only do we nurture a connection to the natural world, but we also learn skills that help us build competence and therefore confidence; we improve our decision-making and our situational awareness; and, possibly most importantly, we learn to push through the suffering—some might call that grit. I remember a 9th grade river trip (September) that had us putting on the river in a sleety snowfall that lasted for the first few days. It was so cold that we pulled the fleet of rafts and kayaks over every 30 minutes or so to run around on the beach to generate heat and keep the blood flowing. To this day, that is the coldest I have ever been. And when I think back on that trip, I don’t think about the moments when I must have been wondering, “What the heck are we doing here?” Rather, I think about the games the kids played to stay warm. I think about their indefatigable spirit—their resilience.

Yes, Riley was signing up for that cold of a trip (or colder at least to start). But Riley’s litany of worries extended beyond the weather; running a river that early in the season is rare and a river during spring run-off is asking to throw all you know about the ins and outs of that river overboard because it will look and run much differently. But the thing about being at home in the elements is that you learn how to adapt to the situation without losing your head. Or your paddle.

Riley made it back in one piece and along the way, gathered some good fodder for future fireside tale-telling sessions, which, if you find yourself in the guiding profession, come about often. He graduated from SVCS (much to his surprise) and went on to Fort Lewis College in Colorado. There was kayaking. There was fishing. And yes, Riley discovered, there was also the expectation that you attend class. “I dropped out after the first semester,” he says, “and moved back home with my mom and dad.” Their tolerance for his indecision and his lack of academic motivation was short lived. “After winter break, they sat me down and basically told me to get my act together (in more colorful words).” So, Riley hopped on the horn with the Fort Lewis admissions office and talked them into taking him back, where he went with no real plan. “Being a late admit, I didn’t have my pick of classes, so I ended up only taking classes on Tuesdays and Thursdays.” And, because Riley is a master of rolling with it and making the best of it, that meant, “Four-day weekends to go fishing on the San Juan River…” Not such a bad gig according to Riley.

But it was on that river that Riley met a man who would help him make the most of his time in college. “One of my first days on the San Juan, I had caught nothing. No nibbles. But I saw an older gentleman upstream who seemed to be having a hell of a day, catching fish every time I looked up there. So, I broke all fishing etiquette and waded up to him and asked what he knew that I didn’t (which was a lot). But we started with what flies he was using.” This man turned out to be Stephen Meyers, an English professor and creative writing instructor at Fort Lewis who only taught Tuesday and Thursday classes so he could have large chunks of time on the river.

It was an auspicious meeting, and one that would help Riley graduate college with an English degree. Riley always knew that the river—or many rivers—would change his life. And, as Riley also knew, his life would not necessarily be shaped by his degree.

Rotatrun is a special nonprofit ski hill in Hailey, Idaho, that has been in operation since 1948. Peppering this valley are people who and businesses which, at one time or another, have pitched in to help at Rotarun. Scott McGrew, the Executive Director of Sun Valley Ski Education Foundation (our partner for SVSA) is also the Executive Director of Rotarun. When he signed on to oversee the “little hill with a big heart,” Scotty helped organize a group of local volunteers who donated their time and talent to installing snowmaking and a new Poma lift, improvements that have reinvigorated the hill. Beyond the capital improvements, Scotty and his team, including Riley as Head of Operations, have developed a creative program that serves particular user groups—a way to generate predictable revenue without having to staff the mountain for unpredictable users. Rotarun rents its facilities out to ski teams like SVSEF and teams that travel from afar to have a hill all to themselves. Rotarun also offers programming that serves first-generation skiers, people for whom skiing isn’t a family tradition, in the Rota-Rippers program.

When he describes the work he does at Rotarun, Riley is all smiles. It’s the sort of job that doesn’t have a “typical” day. He drives a snowcat, he fixes equipment, he solves problems as they come at him. Jokingly, I tell him that’s exactly what an English degree will prepare you for.

The thread that runs parallel to Riley's connection to the elements is his connection to community. That’s part of what kept him above water at Sun Valley Community School, and it’s a significant part of what drives him in his professional life at Rotarun and at Silver Creek Outfitters. Rotarun is, more than anything else, a community mountain offering experiences not readily available at bigger ski resorts like Rota-Rippers and Free Ski Fridays. Skiing under the lights with friends and family at Rotarun is now a favorite Friday night activity for families up and down the valley. And as a fishing guide, Riley is part of a growing community of people dedicated to protecting our natural waterways and the fish flowing through them.

Riley has come back home again, and this time Riley has a plan. 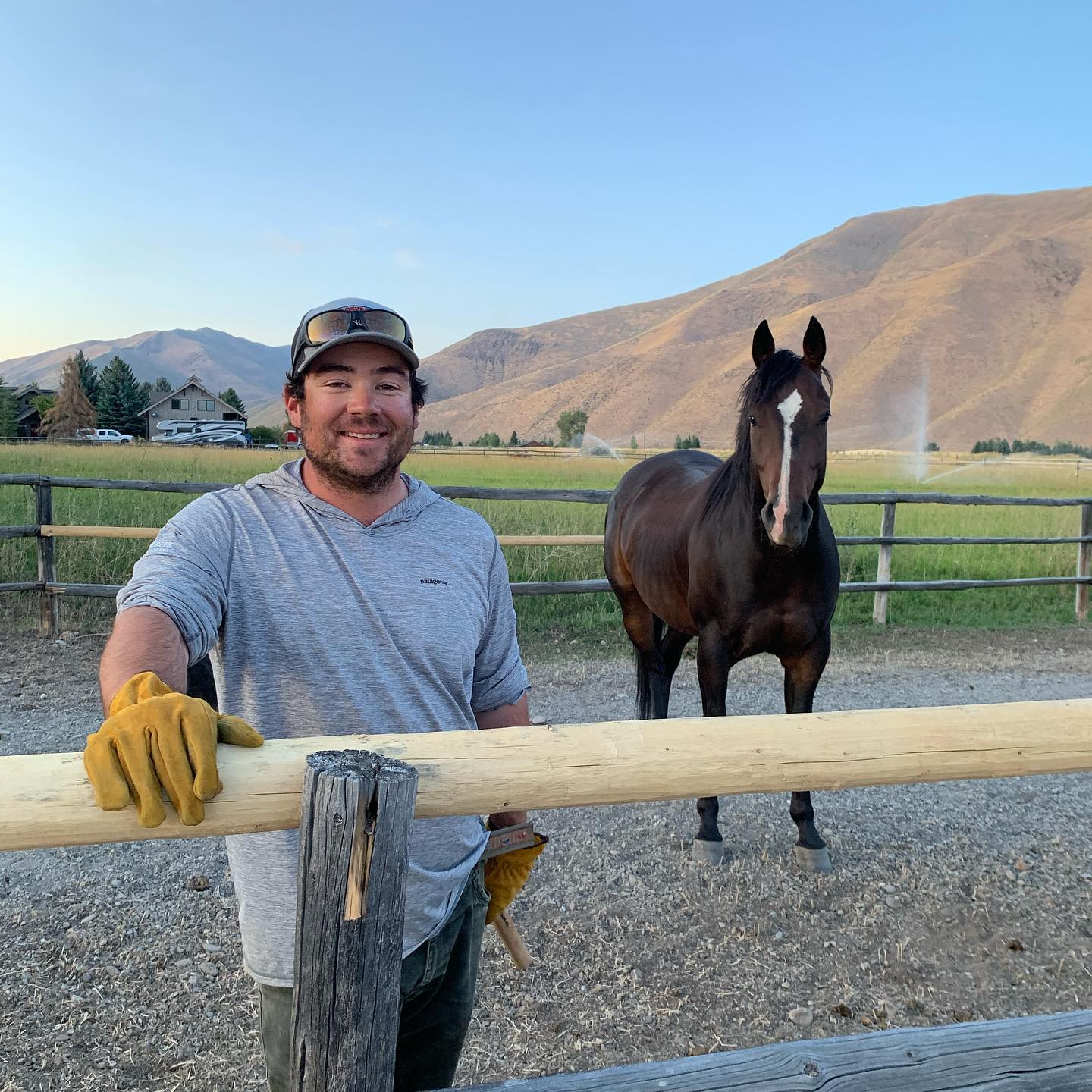