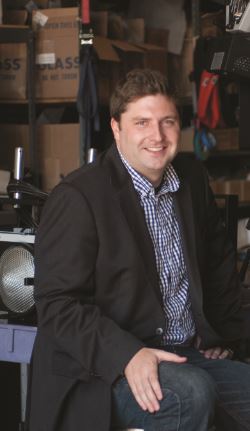 “Being founder and CEO means that instead of reporting to a single person, you have to report to everyone from investors and board members, to customers and the IRS,” he said. “At the end of the day, you are responsible for making the company work.”

As providers of energy-efficient plasma lights for the entertainment industry, Rob and his partner, Brown University pal, Jonathan Miller, are paving a green path through Hollywood as the leading experts and providers of cutting-edge lighting technologies that use up to 90 percent less energy than conventional studio lights.

Although it has been said that Hollywood has embraced green initiatives, that is not always the case when it comes to lighting. But Hive’s impact on the entertainment industry is as clear as daylight. In addition to earning industry awards, including Cinegear Expo’s “Best New Lighting Technology” in 2012, Rob and his partners have built a brand and filled a niche by providing plasma light technology for more than 1,000 productions for film, television, and live events including The Mentalist, The Good Wife, True Blood, CSI, Parenthood, and the Sundance Film Festival.

For those not familiar with plasma lights, here is the scoop: they are energy-efficient, last 30 times longer and have better color quality than conventional production lighting. As a result, using plasma lighting eliminates the noisy trucks and generators that are the staple of production sets. Production and lighting buffs rejoice that plasma lights do not flicker and cover the full color spectrum, compared to conventional bulbs, which are limited. Bottom line, plasma lights are the closest things to natural sunlight you can get. Explained Rob, “Hive is essentially offering more light for less money and energy.”

Rob’s love of film took root in his teens, when during summers and throughout high school, he worked at Ketchum’s Magic Lantern Cinema. After graduating from Brown in 2005, he attended the 2006 Sundance Film Festival, where he found his calling.

“I had such a good time at Sundance, I just kept driving. I drove down to LA to get a job in the film industry,” he explained. “I started in the mailroom of Anonymous Content, became an agent assistant at Endeavor Talent Agency, and then chief of staff at film finance company Media Rights Capital.”

He left MRC, where he met his wife Rachel, in 2009 to help out his parents’ Bay Area-based energy-efficient lighting company, GGI, which he also helped co-found. While there, he cut his teeth learning how to get a start-up going all the while becoming an expert in lighting technologies. It was at a 2011 trade show that he was introduced to plasma lighting and all its benefits. He reached out to Miller, who at the time was in the film production business, and Hive was born. Rob says his ability to take a risk stems from his time at Community School.

“By giving me a supportive environment where I could take risks,” he said, “the seeds of my career as an entrepreneur were planted.” Let the light shine on.

Welcome "back" to school!

Pick Up/Drop Off of Books, Materials, Locker Belongings: 5/27-5/29
Click HERE for directions sent to families on May 26 on how to pick up/drop off books, materials, and locker belongings. Links below for divisional sign ups and directions.

On May 31, our seniors will officially graduate from Sun Valley Community School. As you read in Ben’s recent email, current circumstances are such that we are limited to a car line diploma pick-up at school, with a larger ceremony for graduates and their families later this summer. It is not what any of us imagined, but we have been thinking of ways to infuse it with some fun and celebration, and to share it with you all in some way. Here is our plan:

Sunday morning, the seniors will finish receiving their diplomas and will be in the parking lot at school with their immediate families in their cars, which will be decorated to celebrate the day. After the diplomas are conferred, which will conclude between 11-11:30 a.m., seniors and their families will join a line of cars led by police officers from Sun Valley and Ketchum on a short parade through town. The route will be as follows:

+ Left out of school up Dollar Rd.
+ Left on Sun Valley Rd. and into town
+ Right on Main St.
+ Right on Saddle Rd. and back to school!

We invite you and yours to come celebrate and cheer them on! Please arrange yourselves along the parade route at a safe distance from one another and honor the Stay Healthy Order as set forth by Idaho Rebounds and the Governor's Office in order to ensure the safety of our community.

Feel free to make a poster to hold up, wear your best Cutthroat gear, bring a noisemaker, or just bring your loudest outside voice!

We hope to see you on Sunday so we can send our amazing seniors off in style and show them some Cutthroat love!

Admissions
Our Admissions Office is still open and would love to help you learn more about Sun Valley Community School.

For more information about how we are handling our Connected Learning during this COVID-19 crisis, please visit our COVID-19 page on the website.